A Long Weekend in the Grampians 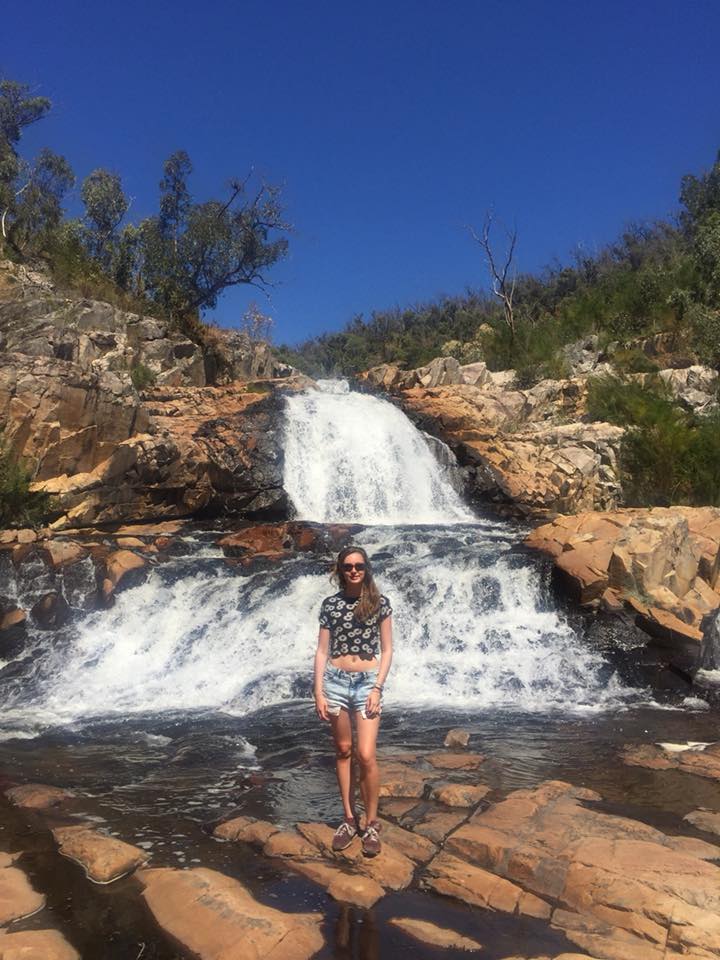 Hello, hello and happy Sunday! If you’ve read my recent post on a long weekend on the Great Ocean Road then you will know that last January (2018) I discovered a love for camping when Conor and I visited the Great Ocean Road. At the end of that trip we were so sad that it was over that we immediately started planning a camping trip in the Grampians to cheer ourselves up. For anyone who is living in Victoria, I couldn’t recommend this trip enough. The Grampians make for an enjoyable short getaway filled with waterfalls, hikes and wallabies.

As with the ocean road trip, there were things that I wish we had done differently, so hopefully someone will read this and learn from my mistakes. However there were also plenty of things that I loved and I’m sure you would too.

So here is our itinerary…

We began our holiday by driving from Melbourne to Halls Gap – the lovely little town in the Grampians. This took us about three hours. We enjoyed some breakfast at a cafe in Halls Gap, and popped into the information centre to pick up a map. Top tip: get a map, as there’s no phone reception in many parts of the Grampians.

At around 3pm we set off for our first hike of the holiday: The Pinnacle lookout walk. This was one of the highlights of the trip for us, and not to be missed. There are several routes that you can take but we chose the Sundial route from the Sundial car park. This took around 45 minutes each way, plus allow some time at the top for relaxing and taking photos. 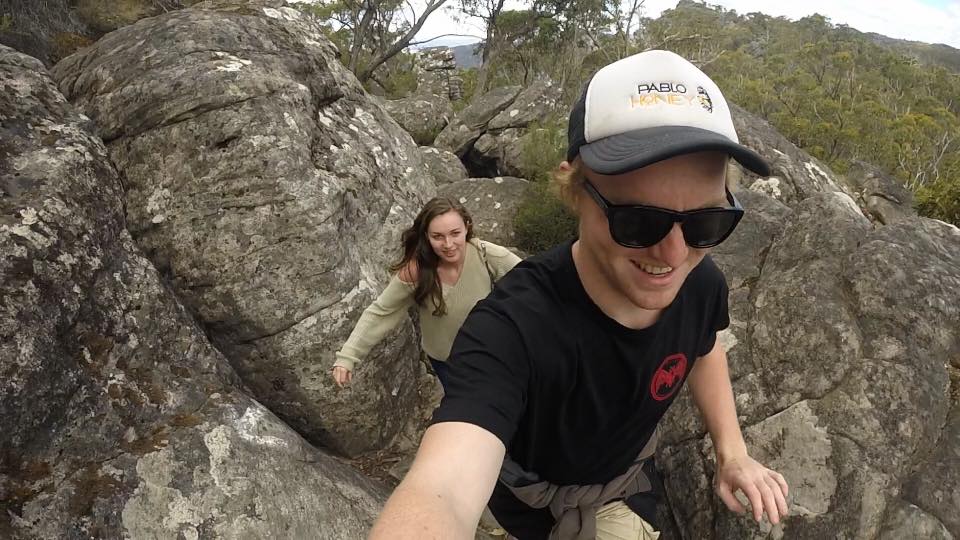 Whilst it’s not exactly a difficult walk, it wouldn’t suit those who are impaired in any way or people who prefer an even path. There’s a fair bit of rock hopping and things like that, but for us that made it all the more fun. We both thoroughly enjoyed the walk, and the views at the top were just breathtaking – well worth the hike. 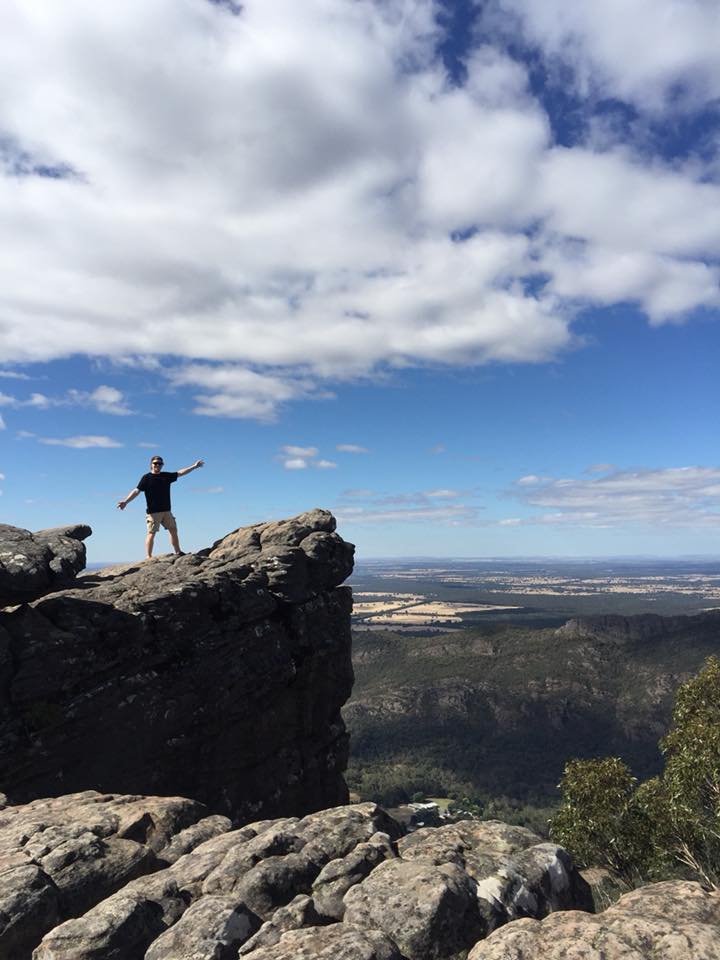 Our next stop was the Boroka lookout, which is about a 20 minute drive away. You can drive right up to it to enjoy stunning views of the Grampians. After this we decided that we should head to our campsite and cook dinner before it got too late. 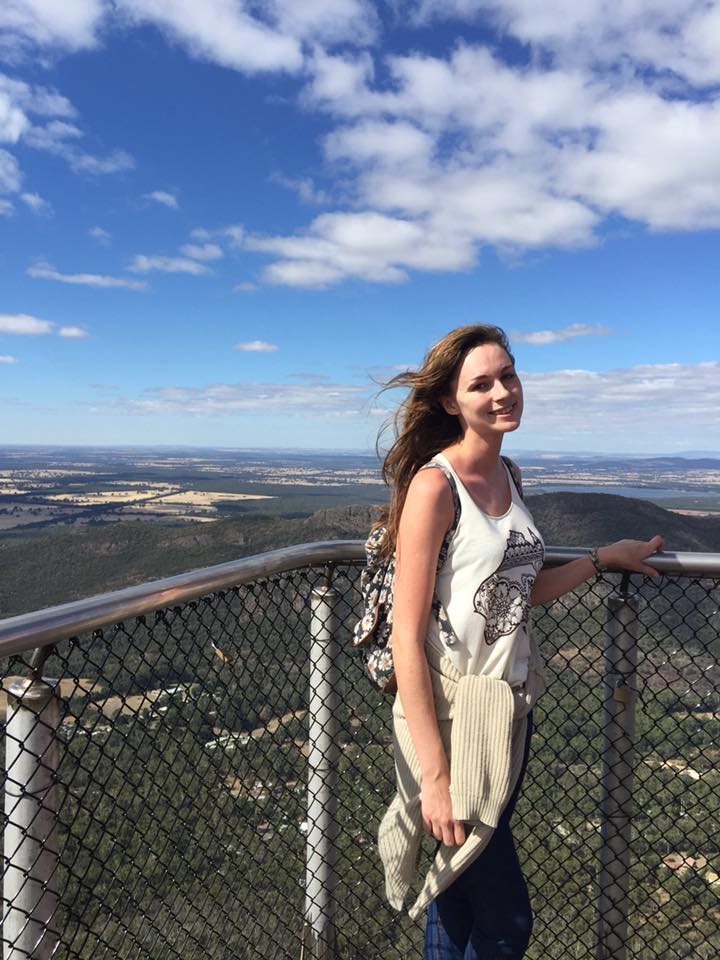 We drove to Plantation campsite, a free camp ground around 20 minutes from Halls Gap. We had originally planned to stay at three different campsites during our stay but we decided to stay at Plantation for all three nights as it was close to Halls Gap and we enjoyed it. It’s a large campground with plenty of space for parking camper vans and pitching tents. There are drop toilets and fireplaces dotted around, and some kind of camping shower that we didn’t bother trying to use. A few wallabies hopped around as we cooked dinner, which we enjoyed. 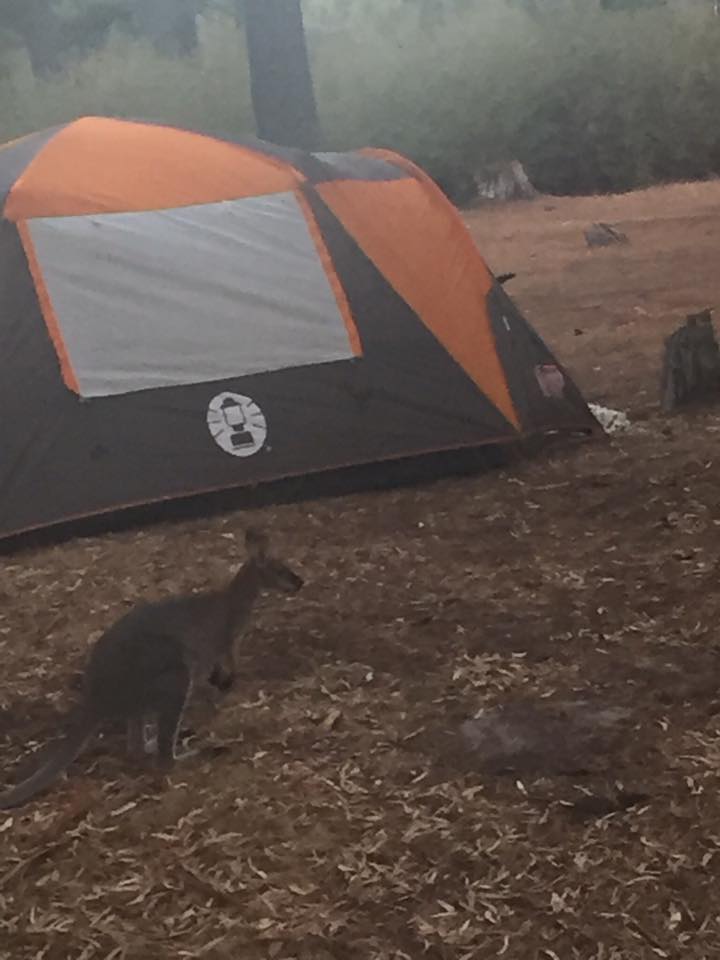 We began day 2 with a quick visit to Halls Gap to pick up some breakfast and supplies. We parked the car, took the rubbish out and had just started walking towards the bins when we heard a noise. We turned around and watched in horror as a massive tree branch snapped and thudded onto our car. I couldn’t help but scream. Top tip: Don’t park under the Gum trees! 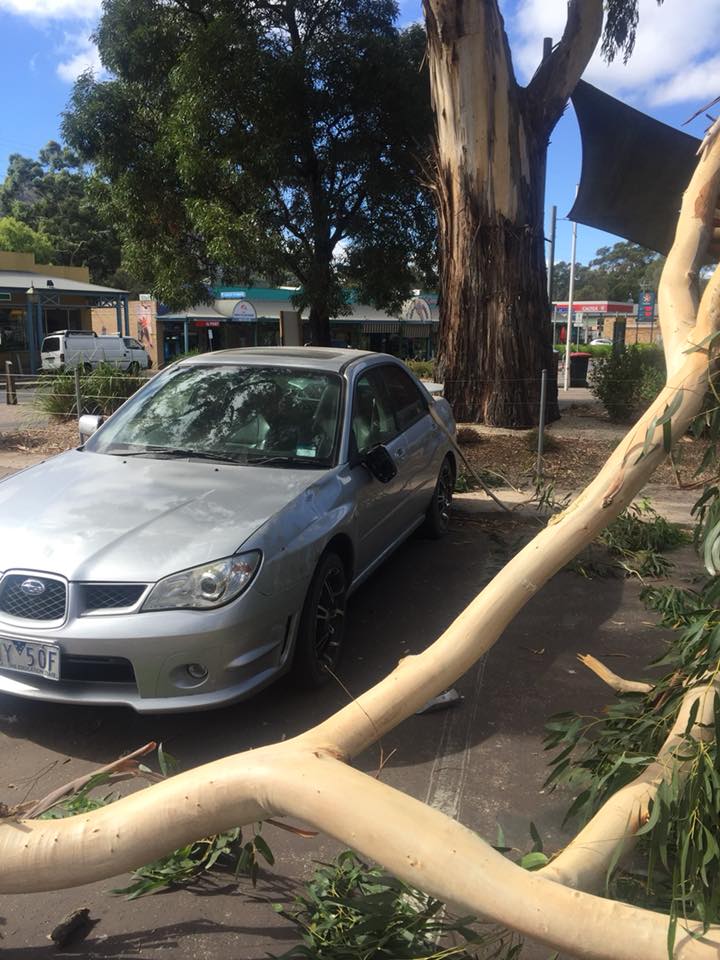 This was before the days of our trusty Pathfinder, and we were borrowing our friend’s Subaru Impreza whilst she was on holiday. Fortunately it turns out that Subaru’s are pretty resilient and the damage wasn’t nearly as bad as we would have expected. The roof survived the heavy branch landing on it and there was just a little damage to the wing, with the wing mirror hanging off. We realised that we were actually lucky that the branch didn’t fall just a minute earlier when I was stood right where it fell. Fortunately we were both ok and the car’s owner, our friend Nicole, wasn’t annoyed. So we counted our blessings and continued with our day, determined not to let it ruin our trip. 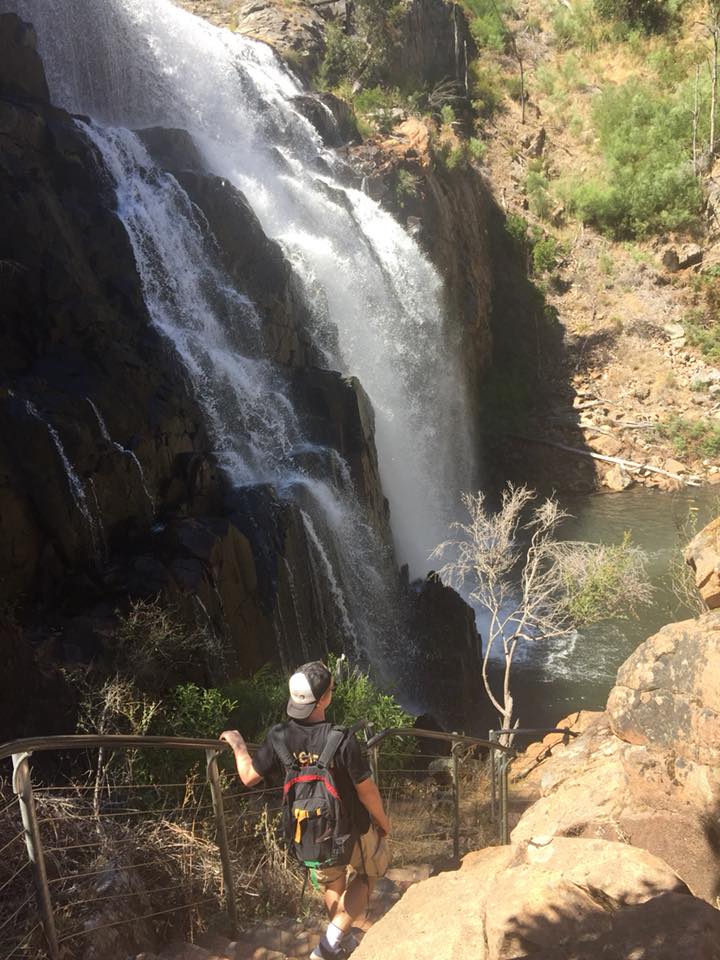 Next it was onwards to the spectacular Mackenzie falls, just a 10 minute walk away. You can walk to the lookout or the base of the falls – we did both. Both were pretty quick and easy, and definitely worth doing. 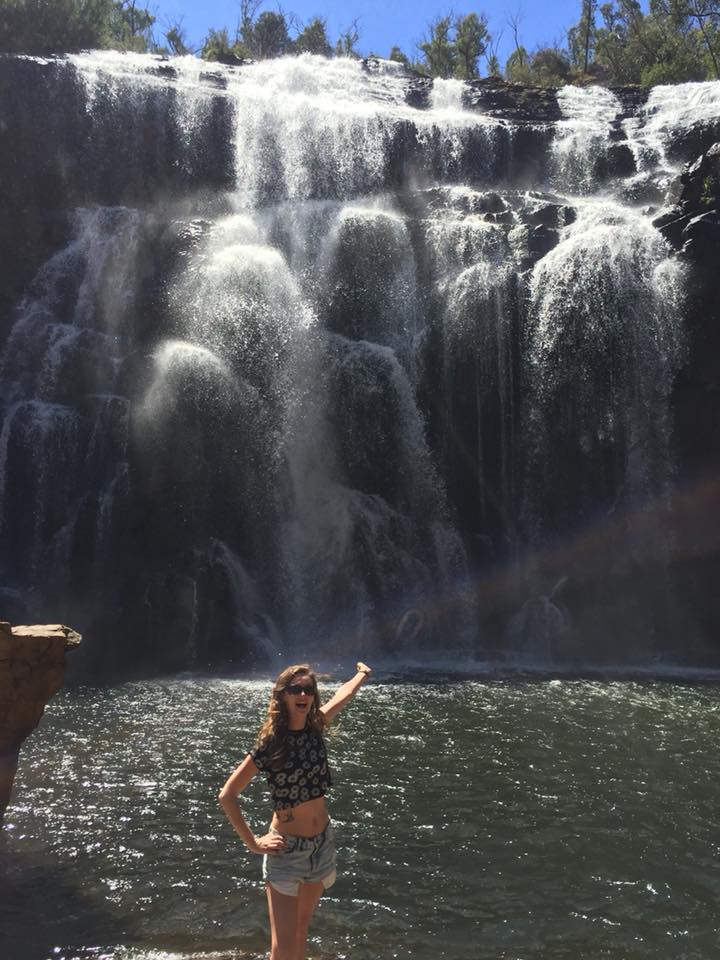 The waterfall itself is stunning. We had read online that swimming here is banned, and as no one else was swimming we decided not to, although it would have been a lovely spot for a refreshing dip. We walked on by the side of the river for a little while, passing mini waterfalls on the way, before heading back to the car. 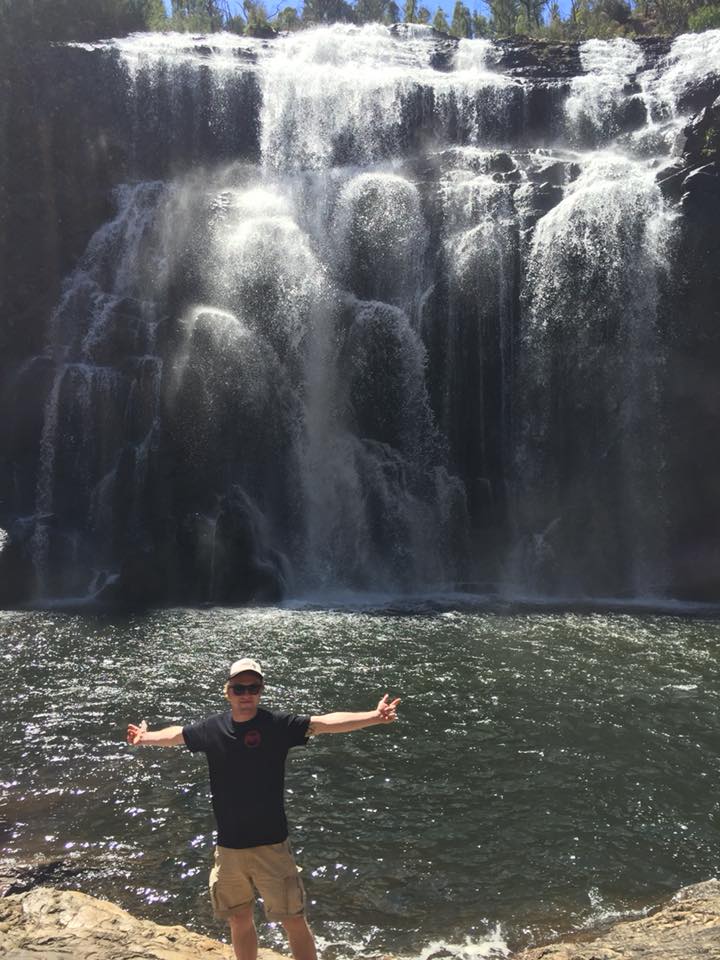 The plan was to head to Fish Falls next – I had seen photos on the Grampians website and it looked gorgeous. However, the route took us off down a track where we didn’t see other people for ages. We began to freak ourselves out, considering the fact that we were in the middle of nowhere with no one around for miles. We eventually arrived at the carpark, where no one else was parked. We began to walk towards the falls, however by this point some strange noises coming from the bushes was enough to completely put us off and we returned to our car instead. 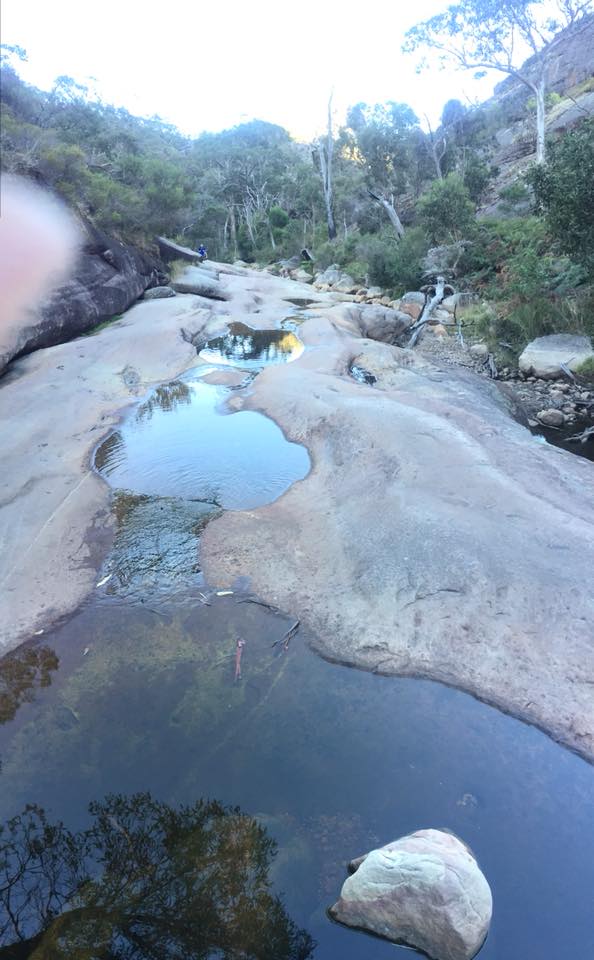 Instead we decided to head to Venus Baths near to Halls Gap. This is a lovely short, easy loop walk with small natural swimming holes, hence the name Venus Baths. It’s a beautiful spot, and we found it very relaxing after the stressful trip to Fish Falls, and refreshing after spending the hot day outside. 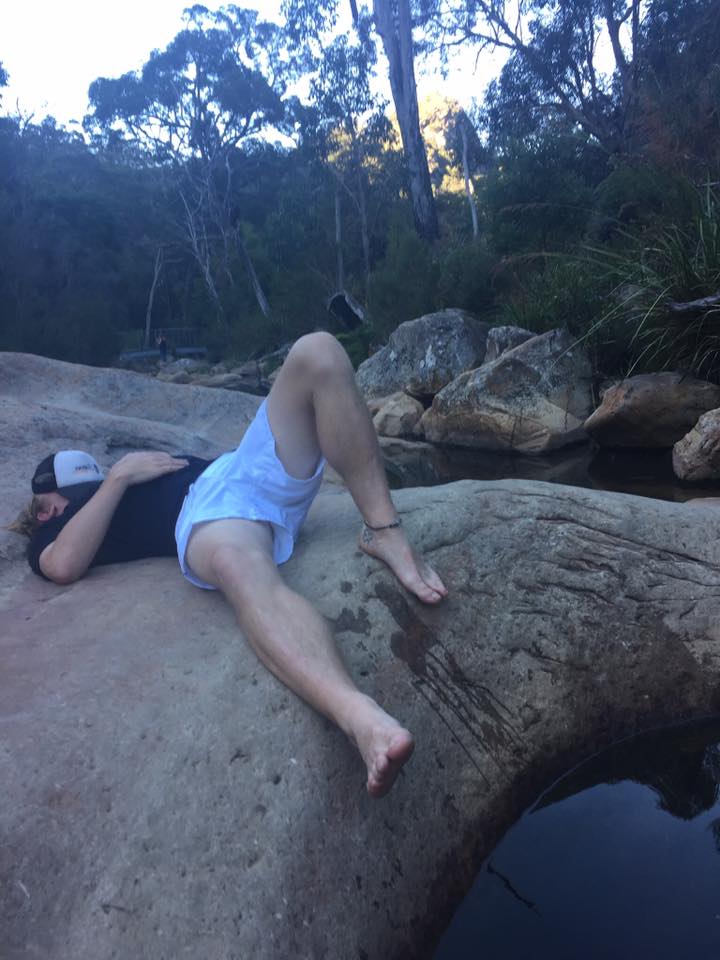 We went not too long before the sun set and it was delightful at this time. After this we headed back to Plantation campsite for dinner, beers and a campfire. 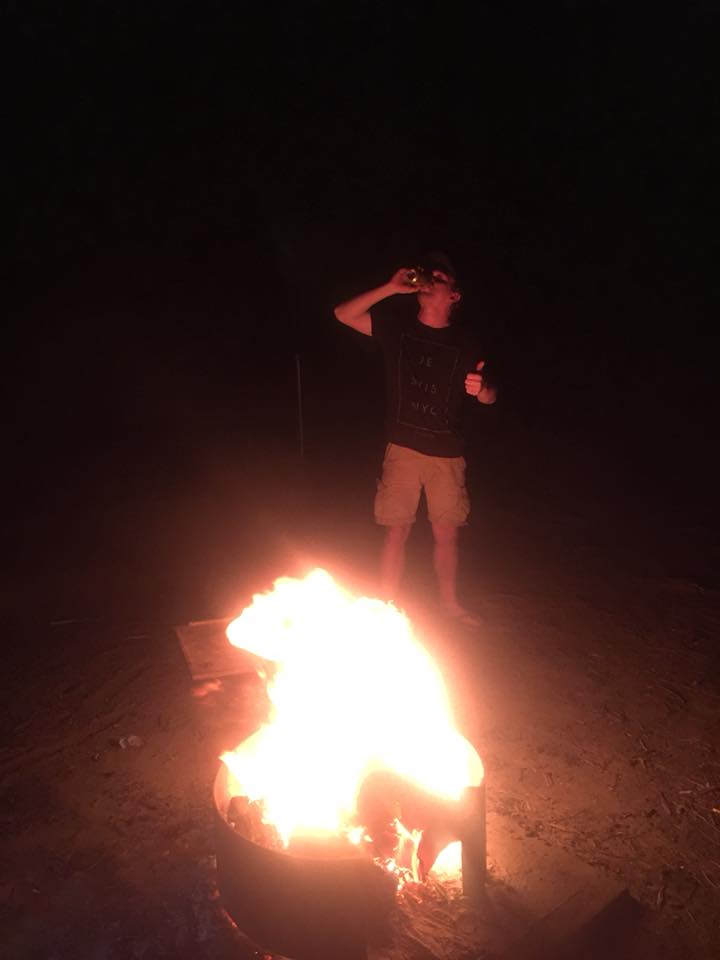 This was our final full day in the Grampians. We thought it would be exciting to hike to the highest point in the Grampians at 1,167 metres – a decision we soon regretted. We drove for 35 minutes to Mt William and parked at the point where cars are not allowed any further. What followed was a 1.5 hour return walk – sounds easy enough, right? The walk was basically just like walking up a hill on a regular bitumen road… but it was steep, relentless and somewhat boring to be honest. We didn’t particularly enjoy the walk and the views were nothing to write home about, compared to some that we had seen earlier in the holiday.

When we arrived at the top we were again slightly disappointed. We just kind of expected something at the top – i’m not sure what but something. Instead it was just a mountain top with a communications station, and views of the mountains. We felt that by comparison the Pinnacle walk was much more enjoyable and with better views. I was determined to make our last day better so we headed back to our car and on towards Silverband Falls – a pretty waterfall with just a slither of water trickling down the rocks. 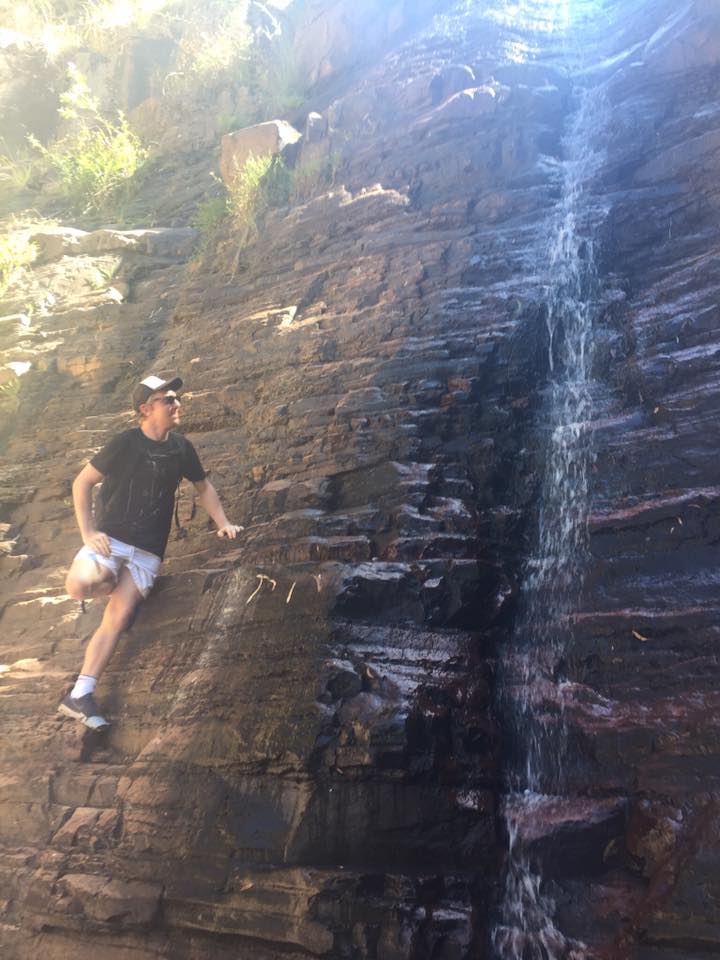 I had promised Conor swimming and that wasn’t going to happen here, so we ventured on towards Lake Bellfield – a beautiful glistening deep blue lake with a gorgeous mountainous backdrop. 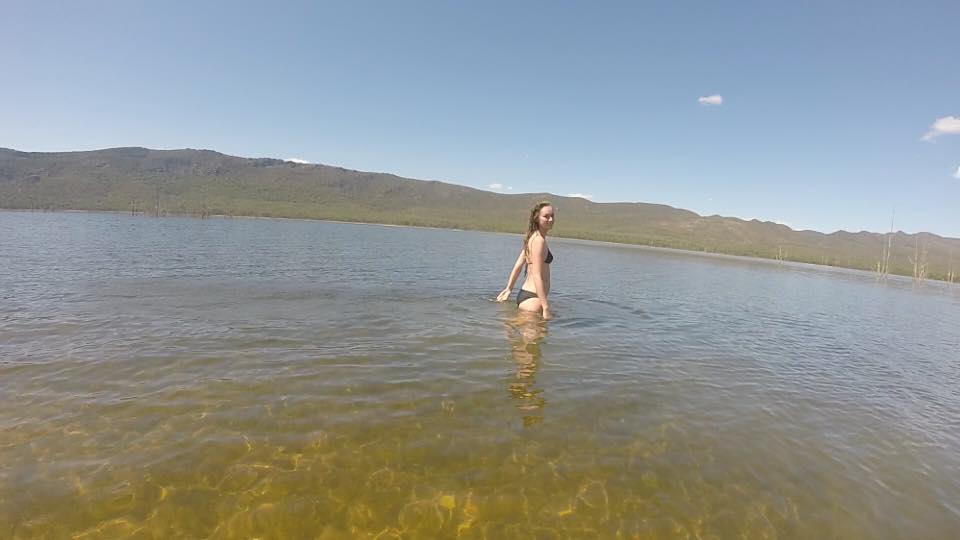 We enjoyed a picnic and an extremely refreshing swim in the cool water. This was a lovely place to relax and cool off in the afternoon sun. 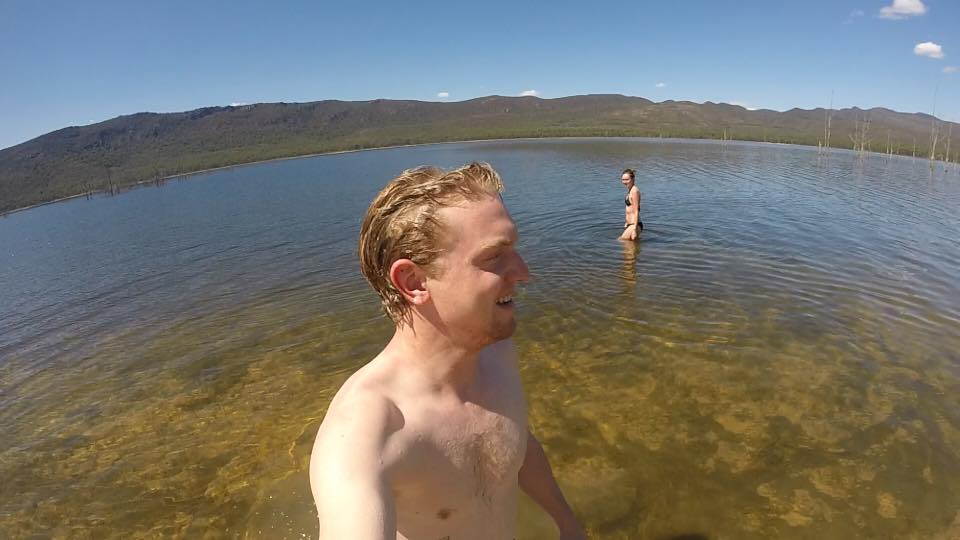 From Lake Bellfield it was a 15 minute drive to the Wonderland Carpark, from which we walked the Grand Canyon Loop. This is a 30 minute walk, which we thoroughly enjoyed. Like the Pinnacle walk, it’s not exactly difficult but does involve a bit of climbing. We both loved this short yet scenic walk. 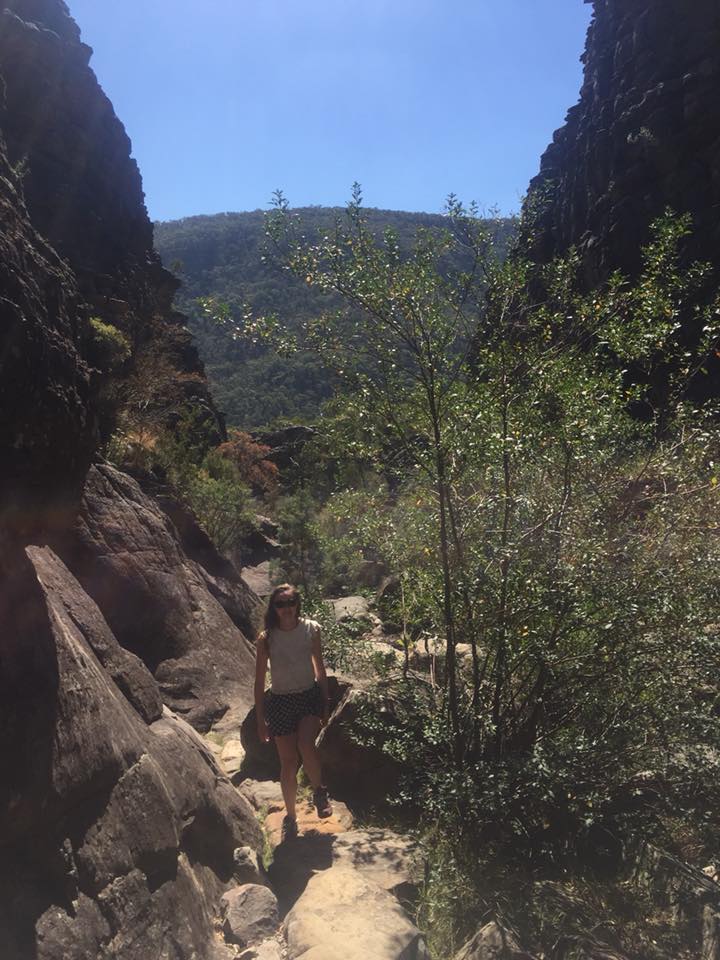 For our last activity of the day, we took a 15 minute drive to Reeds lookout, where we enjoyed lovely views of clear blue skies and dark green trees from the viewing platform. We then took the easy 2KM walk to the Balconies, which gain their name from the unusual rock formation sticking out of the mountain. Here we enjoyed even better panoramic views down into the valley. 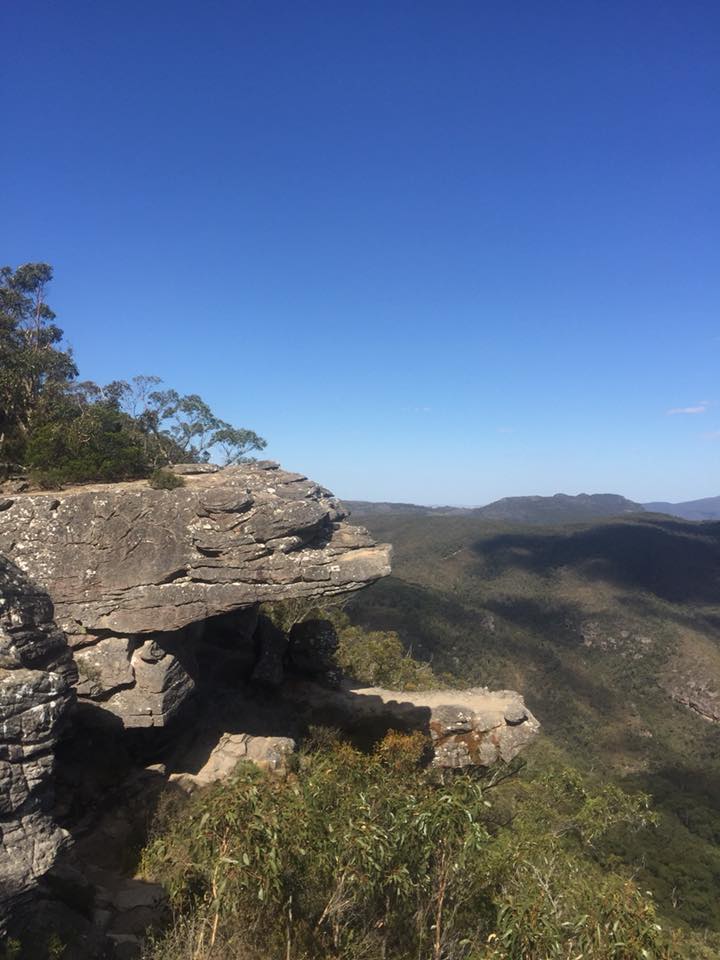 After that it was back to Plantation Campsite for our final night of camping. The next day we decided to enjoy breakfast in Halls Gap before heading straight back to Melbourne. Once again, despite a couple of ups and downs, we were sad that such an enjoyable and relaxing trip was over. I would really recommend this trip to anyone. 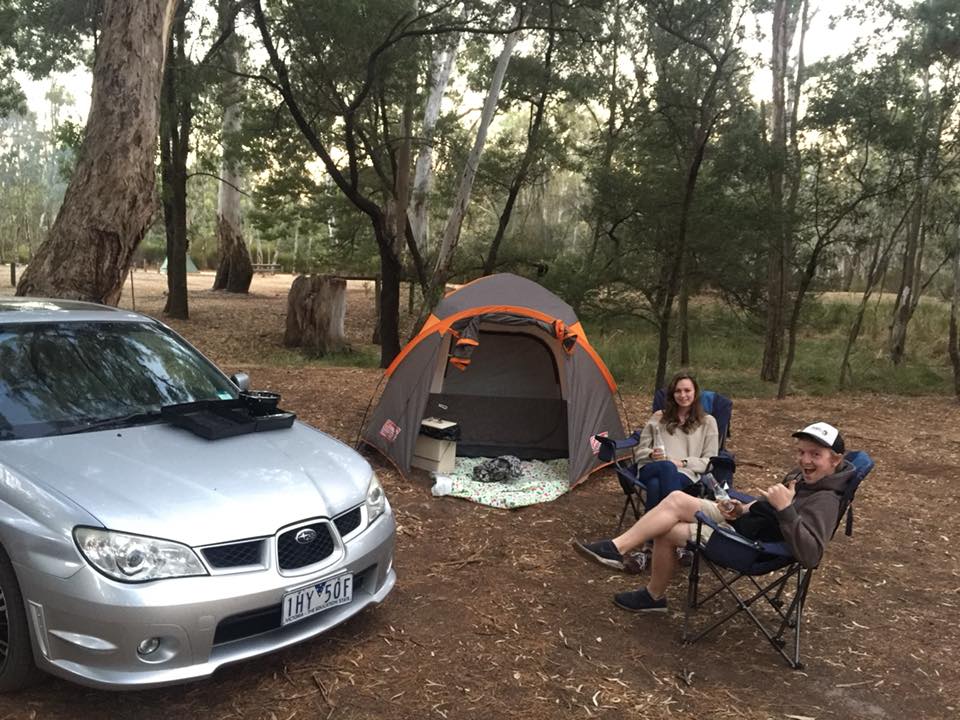 If you’ve been to the Grampians or are planning to go, let me know in the comments!

3 thoughts on “A Long Weekend in the Grampians” 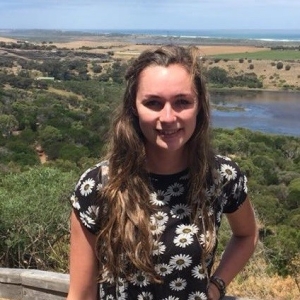